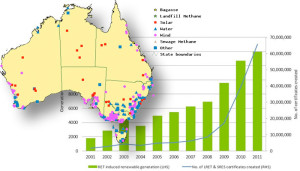 Renewable Energy: Ross Israel from QIC and Andy Vesey from AGL Energy are the new breed of renewable energy evangelists.

They view Australia’s renewable energy target as an opportunity to generate a mainstream discussion about decarbonisation of Australia’s power generation, while at the same time pioneering new methods of financing for large scale solar and wind projects as reported by the Financial Review.

Vesey, who is chief executive of AGL, believes Australia is yet to seriously address the fundamental question of how to solve the problem of an oversupplied energy generation market. He takes every opportunity in public forums to highlight the paradox between the need to meet a renewable energy target at the same time as oversupply is driving down the wholesale price of power.

Creative solutions to this issue will involve complex negotiations between coal-fired power generation companies, federal and state governments, and communities. These big structural changes must be negotiated in tandem with a new approach to the management of the mix of renewables in the national electricity network.

The problems associated with the wrong mix of energy sources have been laid bare in recent weeks in South Australia.

It is clear that the intermittent supply from renewables must be matched with predictable energy sources. One way of solving the problem is large scale battery storage, which is probably coming faster than you think because of the race between providers of battery technology in the United States, Europe and Korea.

Israel, who is head of global infrastructure at QIC, is a big believer in the revolutionary implications for the economy of the combination of battery storage and renewable energy. He says mass adoption of battery storage within the next 15 years will transform Australia’s electricity sector into a decentralised generation model.

Israel’s renewable energy evangelism was in full flight on Tuesday when he revealed a strategic partnership between QIC and AGL Energy to create the $3 billion Powering Australian Renewables Fund. The ultimate objective is to have a $3 billion fund, with $1 billion in equity and $2 billion in debt, to invest in large-scale renewable energy infrastructure.

The  Powering Australian Renewables Fund is underpinned by a long-term energy supply contract with AGL Energy. It is anticipated that AGL’s proposed wind farms in Silverton (up to 200mw) in NSW and Coopers Gap (up to 350mw) in Queensland will be the first two projects offered to the fund.

The fund expects to acquire AGL’s existing 102mw Nyngan and 53mw Broken Hill solar plants as seed assets and to commit to its first new project by March 2017.

The significance of the deal announced by QIC and AGL Energy should not be underestimated. When fully invested the Powering Australian Renewables Fund will provide about 10 per cent of Australia’s renewable energy capacity. To read more click here.

Renewable energy and renewables will be discussed at The National Sustainability in Business Conference; renewables, markets, innovation, opportunities and capital will be held 23 – 24 March 2017 at the Hotel Grand Chancellor, Brisbane.

To express your interest in the Conference CLICK HERE.