Following feedback from Association members and partners the “National Sustainability in Business Conference” will be re-convened on the Gold Coast in October 2016.

The Conference will have the following focus;

Conference streams will include but not be limited to;

The program will consist of keynote presentations, concurrent sessions and workshops.

All presenters will have the opportunity to have their paper published internationally with an ISBN in the “Book and Proceedings and Outcomes” which will be available post event.  The program will have over 40 presenters and all attendees will have access to the pod-cast archive included in the registration fee.

Details on how to speak or present a workshop at the conference will be released later this month.

The conference is an initiative of the Association for Sustainability in Business Inc (a non-government not for profit organisation) and its partners.

Air New Zealand has launched a major drive to “future-proof” its business partly due to its belief a global carbon price will emerge in the coming years.

The aviation sector is responsible for an estimated 2 to 4 per cent of global carbon emissions, making it a target of environmentalists concerned about climate change.

At some point when carbon is priced – and it is coming – then we will be more ready for it than our competitors and it will improve our relative competitiveness as a result.

At a time when some banks are refusing to fund coal projects due to their impact on the environment, Air NZ chief executive Christopher Luxon said it was in the interests of the environment, investors and customers for the airline to change its business practices. 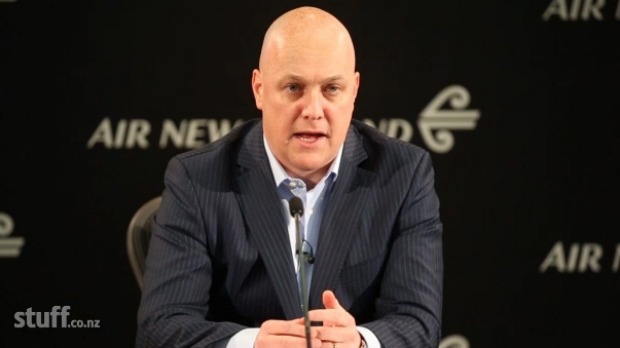 The carrier already takes part in New Zealand’s emissions trading scheme that applies to the 15 to 20 per cent of its emissions that occur domestically, but Mr Luxon said it needed to be prepared for a stricter global regime.

Mr Luxon said Air NZ was expected to grow its capacity by 34 per cent over the next five years, but fuel consumption would rise at a lower rate of 19 per cent.

Mr Luxon said the environmental component was an important part of the carrier’s sustainability focus, but its newly formed sustainability advisory panel was also focused on social and economic sustainability.

Initiatives include working with Tourism New Zealand to ensure tourism is sustainable throughout the year rather than focused on peak periods as well as ensuring the airline’s 4500 suppliers also had sustainable business practices.

As an example, Air NZ now recycles its crew uniforms. Unbranded jackets go to charitable organisations and other garments are recycled and converted into products like carpet underlay, furniture and blankets, saving 6.4 tonnes of material going to landfill each year as well as the disposal costs.

This piece was originally published in the autumn issue of Radar Magazine – Issue 05: Unusual Activists.

Most sustainability talks are about the doom and despair associated with climate change. In his talk, Peter Newman compiles recent trends to show the hope that we could perhaps change enough to meet the global challenges, especially in our cities. Decoupling fossil fuels from wealth and liveability can now be seen with peak fossil fuel investment, peak power consumption, peak car use and peak oil.

Peter is the Professor of Sustainability at Curtin University and Director of CUSP. He is a Lead Author for Transport on the IPCC and was a member of the Advisory Council for Infrastructure Australia. His books include ‘Green Urbanism in Asia’ (2013), ‘Resilient Cities: Responding to Peak Oil and Climate Change’ (2009), ‘Green Urbanism Down Under’ (2009) and ‘Sustainability and Cities: Overcoming Automobile Dependence’ with Jeff Kenworthy which was launched in the White House in 1999.

In 2001-3 Peter directed the production of Western Australia’s Sustainability Strategy in the Department of the Premier and Cabinet. In 2004-5 he was a Sustainability Commissioner in Sydney advising the government on planning and transport issues. In 2006/7 he was a Fulbright Senior Scholar at the University of Virginia Charlottesville. In 2011, Peter was awarded the Sidney Luker medal by the Planning Institute of Australia (NSW) for his contribution to the science and practice of town planning in Australia.

In 2014, he was awarded an Order of Australia for his contributions to urban design and sustainable transport, particularly related to the saving and rebuilding of Perth’s rail system. The Sustainability in Business Association will celebrate its 6th birthday this year with a change of focus and a wider business and sectoral agenda.

Included in the new initiatives are;

• An updated website with increased member content. This will include sustainability podcasts and papers from a number of conferences.

• Members will have the opportunity to present at a selection of conferences and have their business papers published internationally with an ISBN number. Academic papers will also have the option of peer reviewing before publication.

• The Association will also launch a “One Day Sustainability Meeting” series in Melbourne and Sydney, to facilitate the publication of member’s papers internationally.

• Members are encouraged to submit articles (minimum 400 maximum 600 words) for the Association Blog which has an average of 3700 readers per month. Each new story will also be heavily promoted on Facebook, Twitter and LinkedIn.

We will work with and encourage both State and Federal Governments to recognise the importance of the sector to the national economy.

Thanks to ongoing support from our business partners the Association will not charge any membership fees in 2015/16.

Lend your support to these initiatives and join now http://goo.gl/yz2cjg