A Queensland strawberry grower has posted an emotional video to social media, despairing about throwing away drum loads of edible fruit because they do not meet retailers’ demand for extra-large berries as the season reaches its peak.

In response, Coles dropped prices to as low as $1.00 per 250-gram punnet in New South Wales over the weekend to help suppliers move tonnes of excess produce. 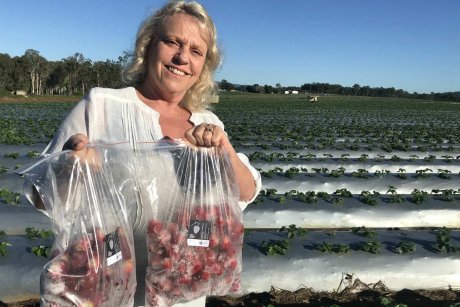 Mandy Schultz was appalled by fruit waste on their farm so decided to freeze and freeze dry strawberries. (ABC Rural: Jennifer Nichols)

The glut may be great news for strawberry lovers, but growers are counting the cost.

On Friday, Wamuran grower Mandy Schultz received a phone call from a wholesale agent to say he was not accepting anything but extra-large strawberries.

She walked through her family’s packing shed that night, filming the trays of rejected sweet, small fruit that had been emptied into drums for disposal.

The dietitian launched her own waste-fighting program last year.

Titled LuvaBerry’s Our War on Waste, it saw Ms Schultz and her team freezing and freeze-drying excess fruit, that she then sold at scheduled meets in carparks.

But this time, on Friday, the freezers were already full.

“We are a farm that makes a really big effort with our waste, so what about the waste from the farms that don’t have anything in place?” Ms Schultz said.

Families did their bit to eat excess fruit, picking assorted sizes of strawberries for $10 per kilogram.

Matt Garratt drove up from Brisbane to support the farm’s war on waste and expressed his surprise that size could be such an issue.

“I actually personally quite like small strawberries, I like them better than the large ones, so that’s a bit frustrating,” he said.

Mandy’s husband Adrian Schultz is the vice-president of the Queensland Strawberry Growers Association and revealed that while production peaks are an annual event, gluts have been exacerbated by larger plantings.

Highly productive new varieties of strawberries that fruit earlier in the season have also impacted profits.

This article was originally published by ABC. Continue reading here.

Want to have your say on sustainability?

Submit your proposal to present at the 2019 National Sustainability Conference, held at Hotel Grand Chancellor Brisbane on Monday 1 – Tuesday 2 April 2019.