See-through solar cells have been created which could turn windows into small-scale power plants.

Researchers at Michigan State University have developed thin, transparent, plastic-like material that can act as an energy-generating coating on windows, and provide additional power when coupled with a rooftop solar installation. 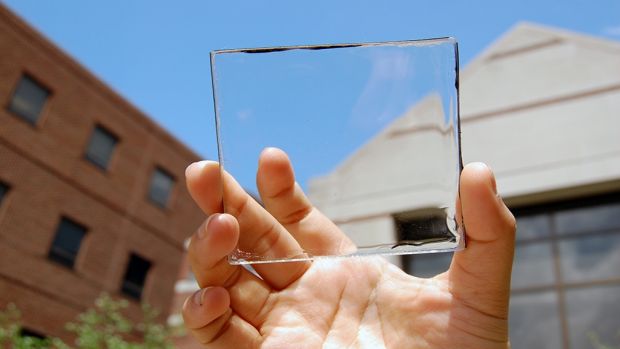 While the technology has existed in its early stages since 2015, it is only now developed enough for projects of scale.

The technology works by utilising organic molecules within the transparent film that absorb ultraviolet and infrared lightwaves – which are invisible to the human eye – and converts them into electricity by directing these lightwaves to small photovoltaic cells at the edge of the screen, while letting visible light through.

The film itself is less than one-thousandth of a millimetre thick.

Currently, the technology is recording energy efficiencies of more than 10 per cent, while traditional solar panels are between 15 and 18 per cent efficient.

“We analysed their potential and show that by harvesting only invisible light, these devices can provide a similar electricity-generation potential as rooftop solar while providing additional functionality to enhance the efficiency of buildings, automobiles and mobile electronics.”

The technology can be used to improve existing solar panels efficiency levels by creating an additional layer of energy collection without interfering with conventional photovoltaic cell operation.

The application of the solar film exists for small-scale electronics, such as mobile phones, e-readers and wearables, and has been put forth as a way to extend battery life.

“That is what we are working towards,” Mr Lunt said.

“Traditional solar applications have been actively researched for over five decades, yet we have only been working on these highly transparent solar cells for about five years.

“Ultimately, this technology offers a promising route to inexpensive, widespread solar adoption on small and large surfaces that were previously inaccessible.”

This was originally published by the Sydney Morning Herald.

The 2018 National Sustainability in Business Conference will be held on Thursday 8 and Friday 9 March 2018 at Hotel Grand Chancellor, Brisbane.  The 2nd annual conference will explore sustainability best practice within organisations, creating resilience in business and ways to implement change.

Conference speakers and partners will provide insight into how  they are interweaving sustainability practices within their organisations, navigating change and the differences they are making within national and  multinational companies and small business.

Register to secure your spot today!