Perhaps one of the many points coming out of the Grattan Institute’s latest report is the idea that rapid expansion of renewable capacity must necessarily mean higher electricity prices. But what has been the experience in Europe over the last five years during which there has been a rapid expansion of renewable capacity in most European countries? 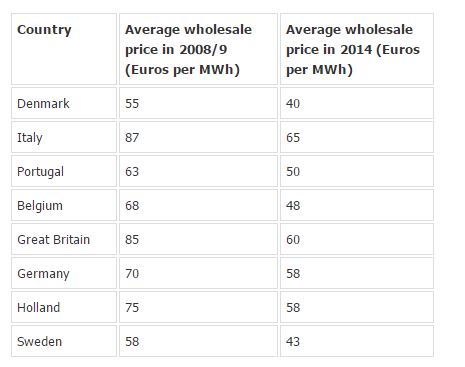 The table above show substantial price declines. It might be argued in response that since gas is the marginal fuel in most countries, this is reflecting the impact of lower gas prices over this period. Maybe, but that is not the whole story. The rapid expansion of renewables has also driven declines in wholesale prices.

This is well documented and the last few years has seen many venerable European power houses split themselves into the energy equivalent of a “good bank” and a “bad bank”, with the carbon-intensive generators sequestrated in the “bad bank” to manage their decline, and the “good bank” freed of the dead-weight to capitalise on the huge opportunities in renewables.

The rapid expansion of renewables in Australia may, as in Europe, not necessarily translate into higher electricity prices. Instead the expansion of renewables may be funded in large part by the wealth rushing out from carbon intensive electricity production. Carbon intensive producers will of course not like this, but reducing emissions must mean that it is not profitable to produce them, there can be no two ways about it.  In fact, to the extent that it does not occur this way in Australia, policy makers, consumers and the community might ask why.