Making up 65 per cent of global energy use and 70 per cent of anthropogenic carbon emissions, cities must play a crucial role in the shift to a low-carbon economy says IRENA.

A new report from IRENA focuses on best practice gleaned from thousands of cities around the world making up 60% of global energy demand, demonstrates what is possible and details the sorts of policies required to enable the change.

“Renewable energy, combined with energy efficiency, will power the future growth of cities. We must ensure this transition happens as soon as possible.”

Key to a successful change is understanding how energy is used in urban centers. A plan that may work for one city may not work in another due to differences in consumption. For example, cities in cool climates have a greater heating load than those in warmer regions. 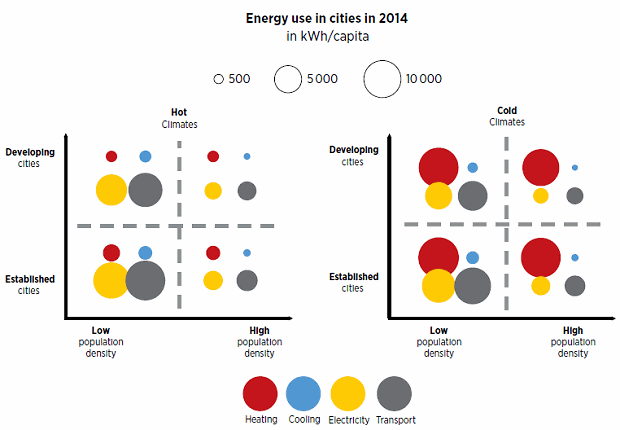 Population density is also an important factor. Cities with high population density are more suited to renewables-powered electric public transit systems, whereas low density cities with larger rooftop areas could benefit from technologies such as solar panels and supporting the growth of electric cars. Both rooftop solar PV and solar hot water systems are easy to install and offer significant economic gains.

The report points out that while energy policies are often decided at a national level, city governments are in the best position to customise renewable energy strategies to specific local circumstances.

A very recent example of this close to home (but not specifically mentioned in IRENA’s report) is in South Australia. Adelaide City Council has powered ahead with plans to make the CBD carbon neutral by 2025; incorporating a set of initiatives and incentives to encourage uptake of solar power, battery storage and other technologies.