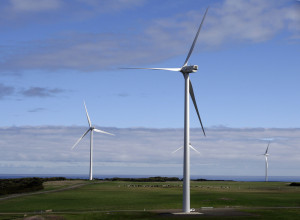 All new wind farm projects would have to undergo an assessment to see how they would affect the electricity market before being approved, if changes proposed by the Opposition were adopted as reported by Lauren Novak.

The move comes in response to concerns raised last week after major employers warned the State Government they were considering shutdowns because of wild fluctuations in energy prices.

The instability was blamed in part on wild storms, demand interstate and delays in upgrading an interconnector with Victoria.

Opposition Leader Steven Marshall added that South Australia’s “massive abundance” of renewable energy, such as wind and solar, was “undermining the viability of baseload power in this state and that’s causing volatility and … massive increases in electricity prices”.

Mr Marshall said his party was drafting amendments to the Development Act because the current law “has no regard for the need to provide reliable and affordable electricity for families and businesses”.

“There is currently no consideration of the broader impacts of wind farms to the electricity market under the Weatherill Government,” he said.

“The alternative is the Weatherill Government’s plan is to shop around and blame others.”

The social services sector last week warned the state’s rapid rush into green energy had created uncertainty for both households and employers.

A Deloitte Access Economics report has also forecast household prices will spike over the next two years due to SA’s high level of green energy.

However, Energy Minister Tom Koutsantonis rejected suggestions the state’s long-held policy of pushing green energy, which has made SA more reliant on those sources than almost anywhere in the world, caused a supply crisis.

Mr Koutsantonis said Mr Marshall’s proposal was “a flawed policy that he hasn’t thought out”.

“What we need to do is smash the monopolies … by interconnecting with other jurisdictions so we can get our renewable energy out to other markets,” he said.

“What his legislation will do is entrench the monopolies.”

Mr Koutsantonis said the recent instability had caused “massive price fluctuations” for business, but was unlikely to flow through to households that were on more stable, long-term contracts.

“Wind and solar are not to blame — they are a political scapegoat for broader failures in an electricity market that rewards over-investment in poles and wires and bad behaviour from too few and too powerful big energy companies,” Mr Wilkins said. To read more click here.